In the last post I introduced you to Durandal a SPA Framework, which can be used to create SPAs on top of the SharePoint infrastructure. This time we’re going to leverage Marc Anderson’s SPServices as a data service for our SPA.

The obvious disadvantage is that web services are deprecated in 2013, so they might go away with the next major release. If you are already running on 2010/2013 and don’t have to support older browser versions you might want looking into using REST services with JayData or Breeze instead… but that’s worth another story.

Seeing is believing so here a couple of screen shots using IE versions that roughly matches the SP release time. 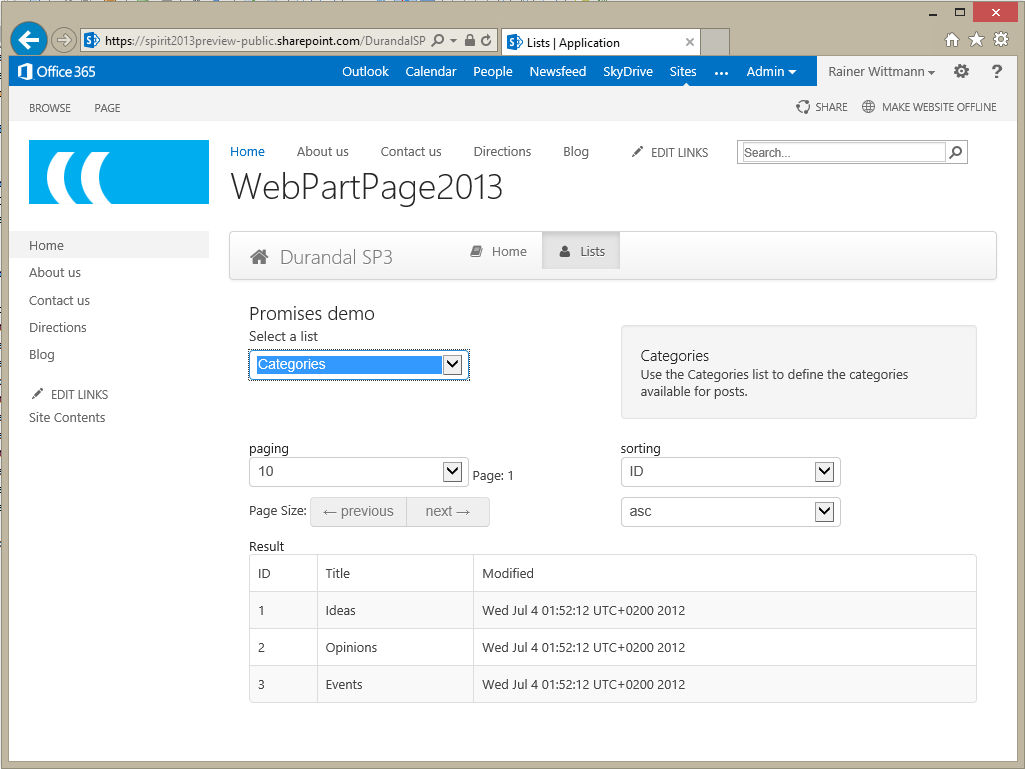 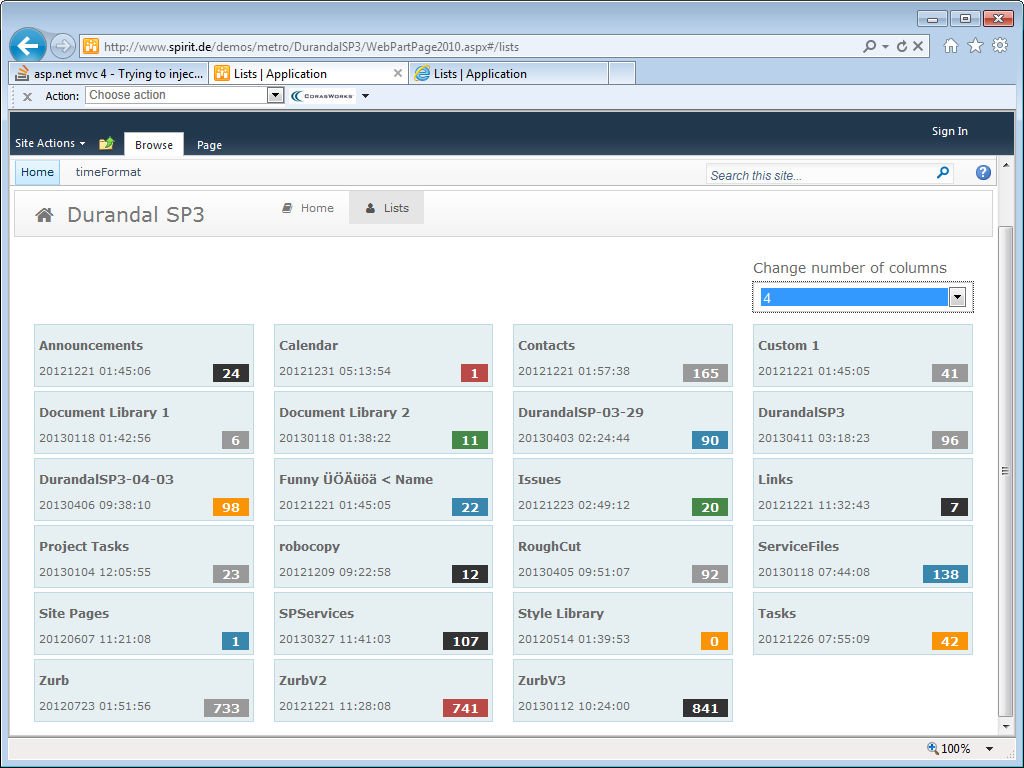 In SP2007 you’ll notice some issues with the CSS that is used in the SPA otherwise it’s fully functional. That is less an issue with IE7, but more with SP2007 that is running pages in Quirks mode. A quick workaround would be to apply a DOCTYPE to the pages that host your SPA. 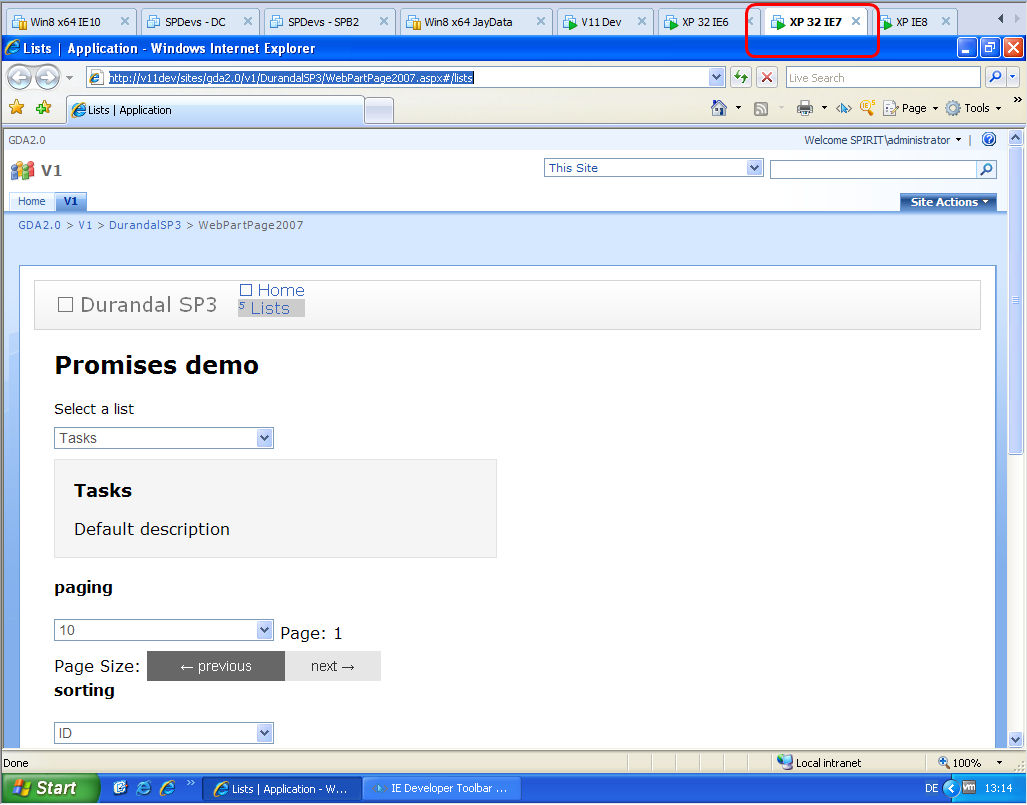 Sorry, I’m out of historic SharePoint VMs. Please give me a shot if somebody has still access to a SP2003 environment. I’d love to add the missing screen shot.

Now, after hopefully getting you excited, here’s the bad news. The demo is using the alpha release 2013.01ALPHA5 of SPServices, so I won’t make the demo code available through Github as usual. I’ll update this post once the next official version of SPServices has been released and tested with Durandal SP3.

The good news is that there are two public available pages that allows you to go hands-on. Both are best viewed with your favorite console open.

Without going into the details lets see what the Promises demo app is doing when you activate the list route (/#lists).

Update 2013/04/11: The live demo was updated based on some feedback I got. The list overview now produces a configurable row view of lists with meta information like ItemCount and Last Modified. Step 2 and 3 are performed once you select a list.

By opening up the optimized build and filtering the network tab for XHR you can see the three POST requests to lists.asmx nicely lined up. Once you start selecting other lists, you’ll noticed that the number of XHR requests decrease as more and more cached information becomes available. 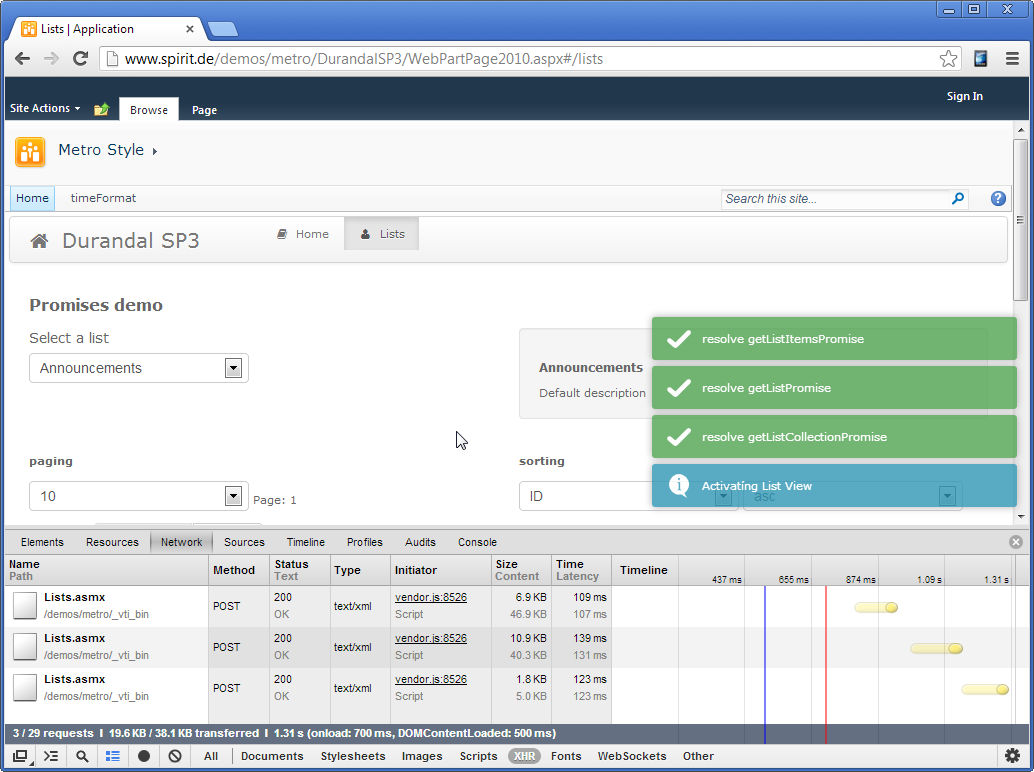 The development version on the other side shows far more details via the console. That allows you to get familiar with Durandal’s application life cycle and to inspect the Json result of some spdata methods. 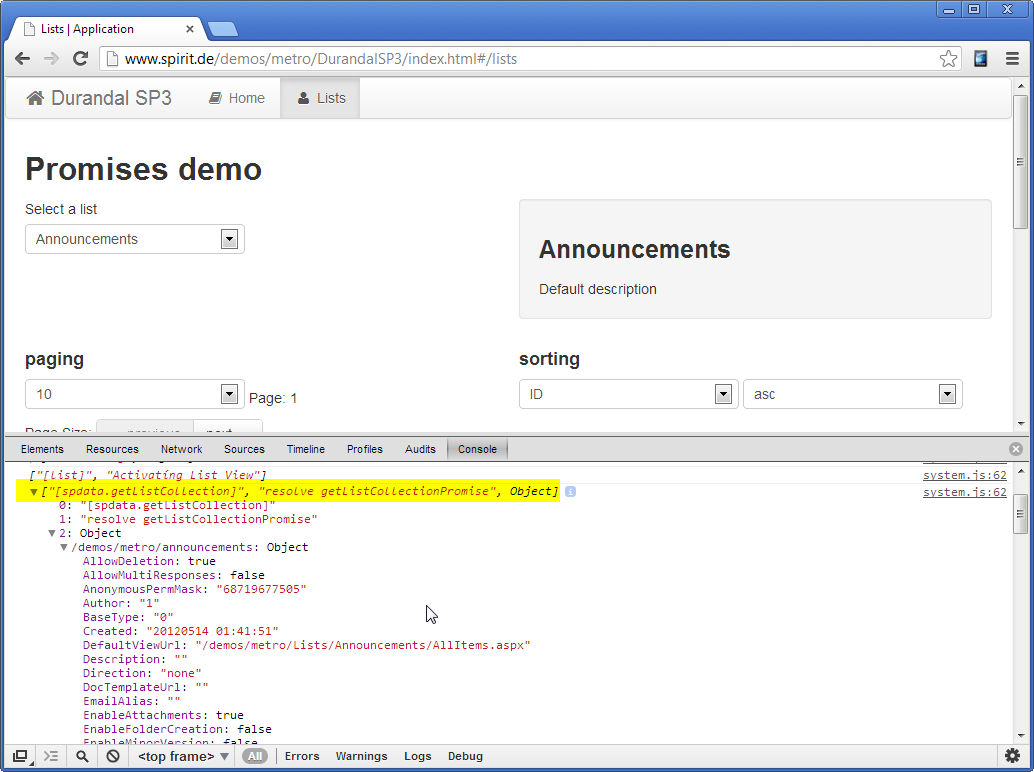 After reading so far and hopefully seen the Promises demo in action by yourself, I hope that you share my excitement of the upcoming promise support in SPServices. Once it’s part of an official release SPServices will become a perfect fit for Durandal’s life cycle methods.

Update 2013/04/16 Marc Anderson reposted this article as SPServices story and added a bunch of additional, valuable information. Do not miss to check it out.