One of the benefits of the new SharePoint 2013 app model is that we are nowadays allowed to live on the cutting edge of technology. At least if you build Autohosted or Providerhosted apps. If that what you’re doing make sure to read Scott’s Announcing release of ASP.NET and Web Tools 2012.2 Update, install the bits and then explore some of the new MVC4 templates.

Next step would be to look at Ananu’s blog aanuwizard as it has step-by-step instructions for you how to add a MVC4 project to your SharePoint 2013 apps.

Let me introduce you to Durandal, a pretty young SPA framework, which is named after a famous French sword. As it states on the web site

Your search for a SPA framework ends here.

Durandal claims to be comfortable

We didn’t try to re-invent the wheel. Durandal is built on libs you know and love like jQuery, Knockout and RequireJS. There’s little to learn and building apps feels comfortable and familiar. Dive in and enjoy.

Durandal claims to run Anyone and Everyone

In the end, Durandal is just a collection of JavaScript libraries, so you don’t need anything special to use it. Hop on over to our github repo and fork away. You can just grab the contents of the App folder and use it to kickstart your own project.

Alright let’s test these statements by throwing Durandal into a SharePoint-hosted SharePoint 2013 app and see how it goes.

Before we start here’s a screen shot of the final result as teaser. There’s an online version as well and the VS template can be forked from github. 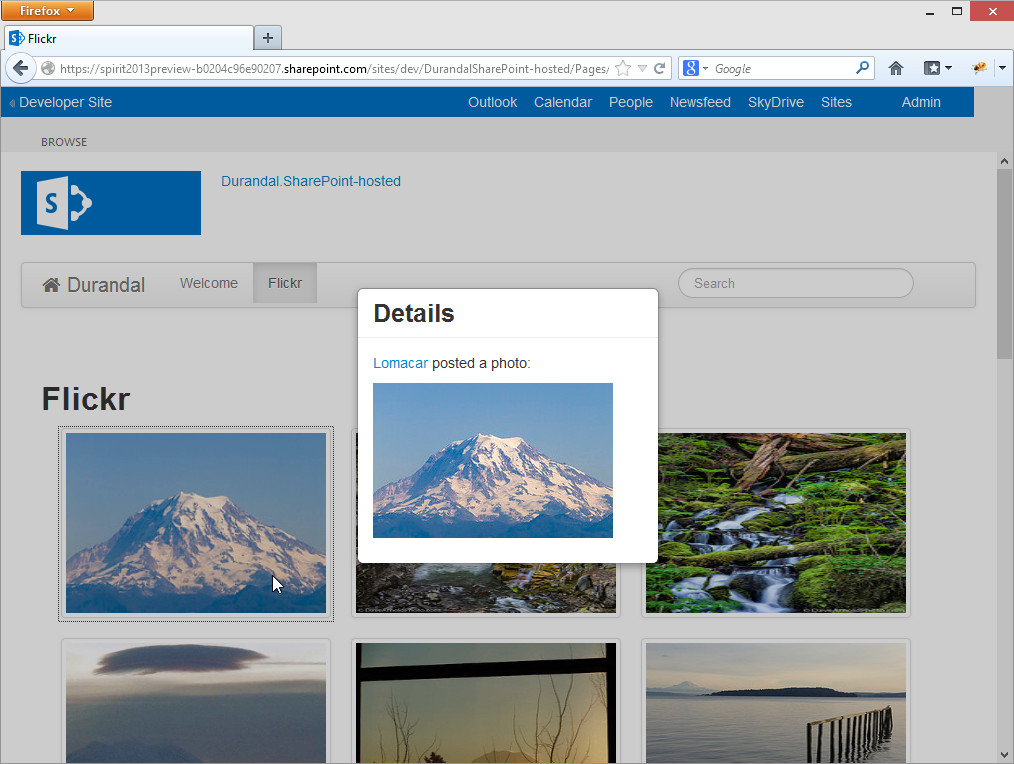 We are starting by opening up the MVC4 Durandal starter template and creating an OOTB SharePoint 2013 app of type SharePoint-hosted. Files in the MVC Content and Script folder can be copied straight away, because there are already corresponded modules in the SP template. Create a new module named App, copy all App files from MVC4 app and make sure to exclude App/Durandal/amd/optimizer.exe from the project. By default SP won’t allow upload of .exe files. Do NOT delete that file, we’ll need it later. 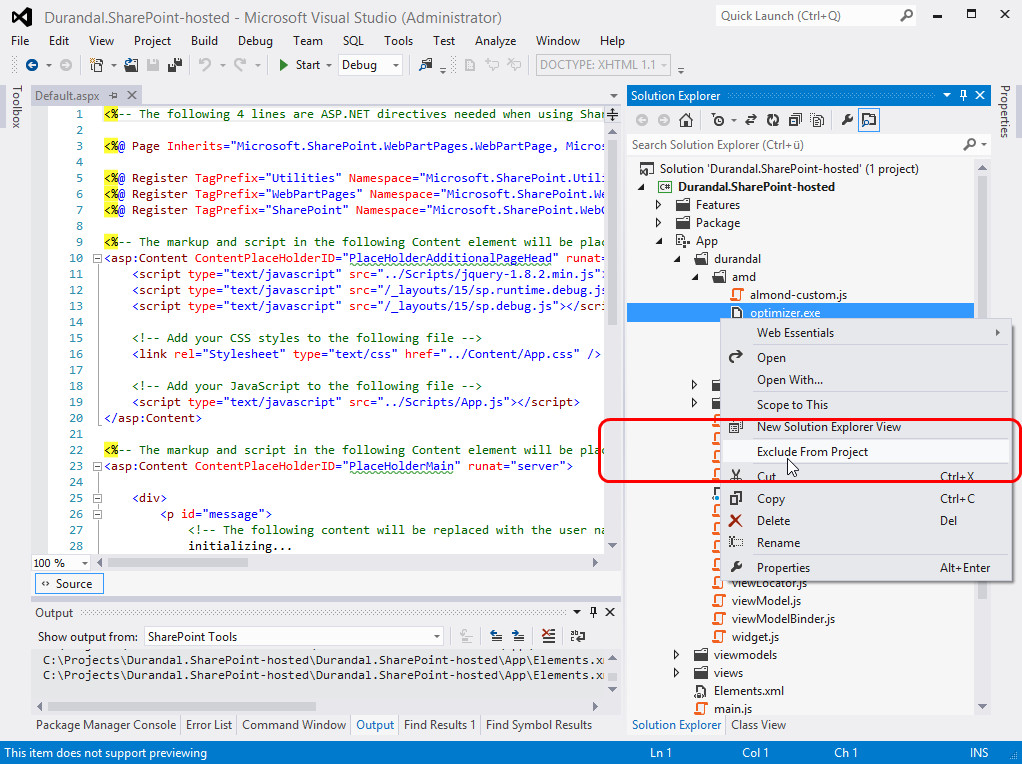 In the next step we’re copying the necessary bits from Index.cshtml and _splash.cshtml into our Default.aspx and adjust them to the aspx syntax.

In order to substitute the MVC4 BundleConfig settings for CSS and JavaScript files you must have Web Essentials 2012 installed. If not, this is a good time to install it otherwise the next step won’t work. 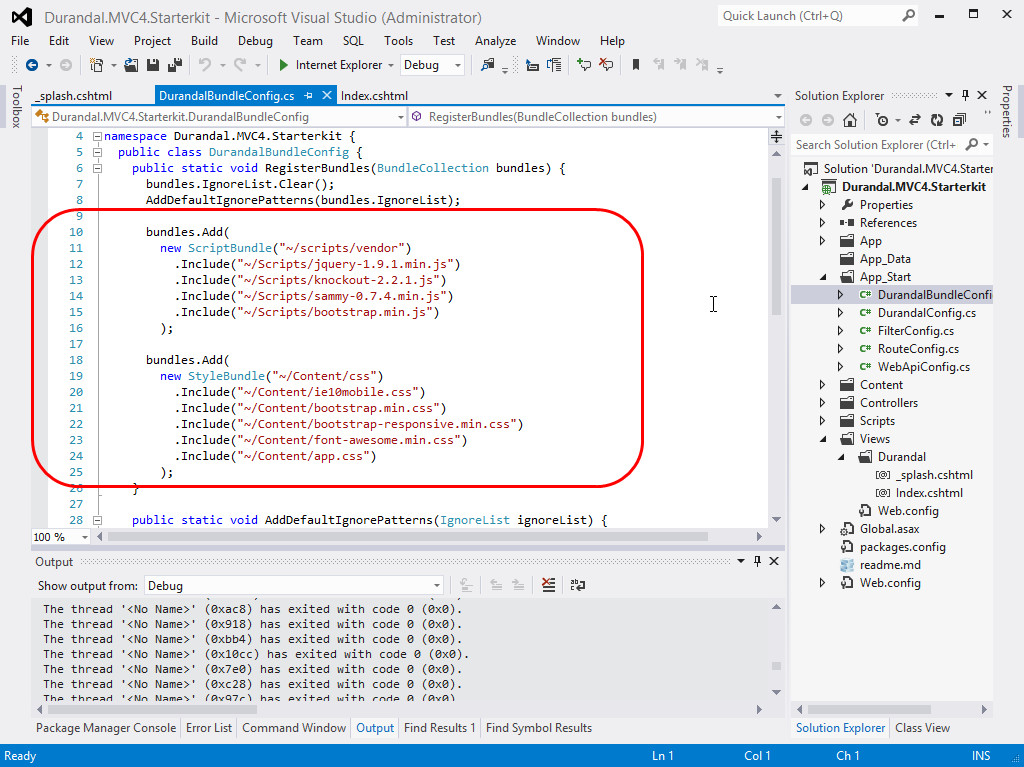 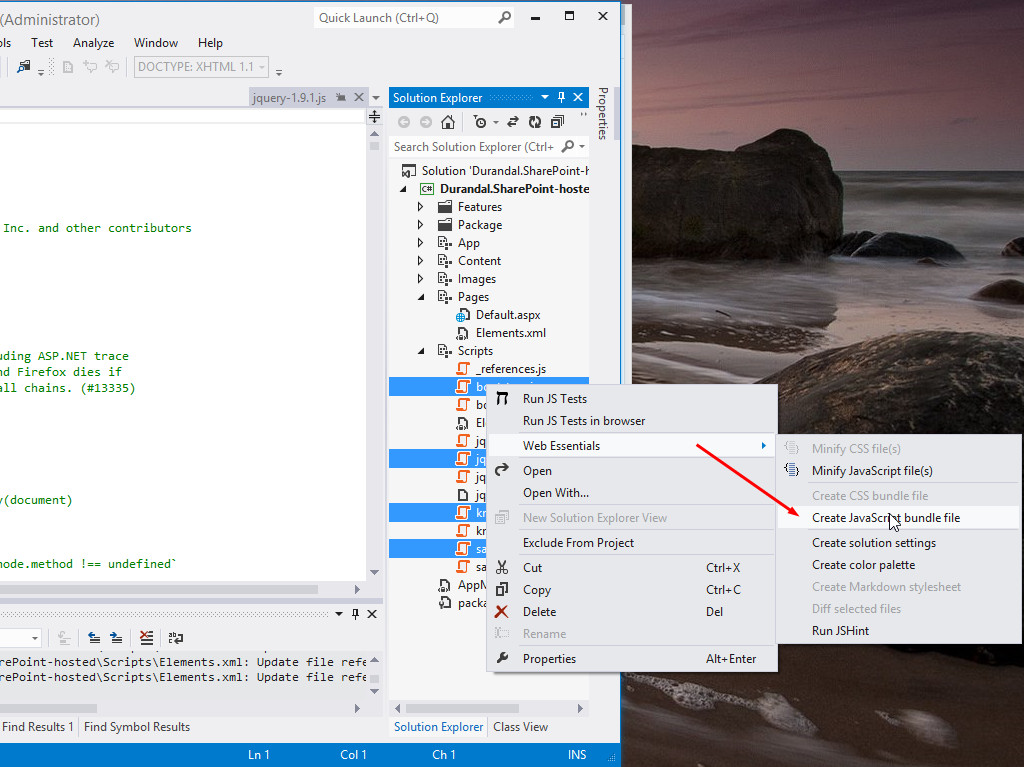 Hit F5, wait till the upload has finished and you should see something similar like this. 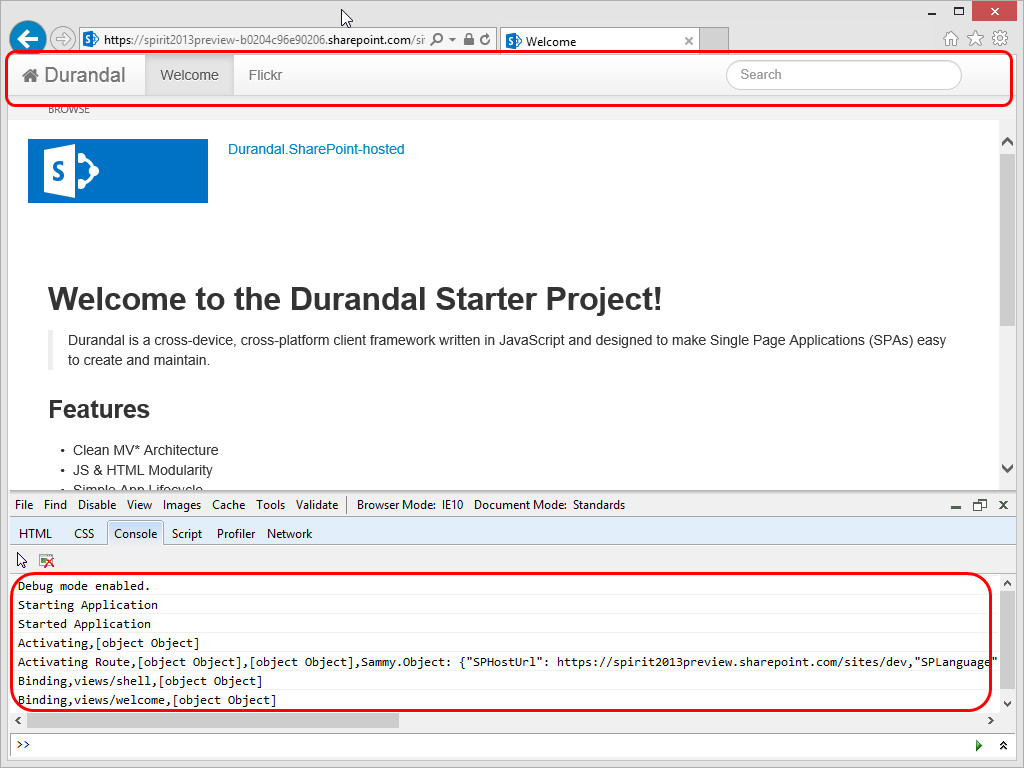 Not that bad for a first stab I’d say, you’ve reached Durandal’s development mode. All AMD files will be served individually and in addition we are getting a whole amount of logging messages in the console. That’s the place where later down the road you’d spend most of your time, so make yourself familiar. Today we simply heading forward to production, but before we do that let’s make a small adjustment to Durandal’s navigation bar because at the moment it’s overlaying the default SharePoint top nav. If you are already familiar with Durandal’s app structure the next two steps are obvious. If not here are some readings that get you started:

In order to address the positioning of the navbar remove the navbar-fixed-top class in views/shell.html. 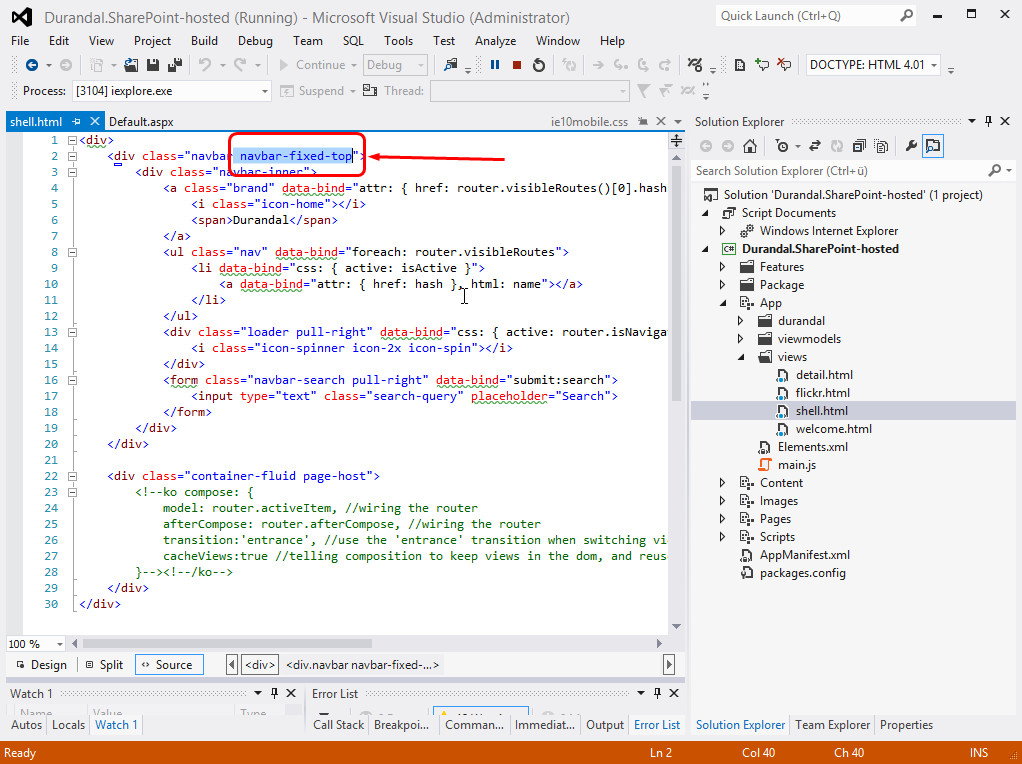 And now a scary moment. Let’s create an optimized version of our app by going down to a command line and run optimizer.exe. Remember, that was the file that we excluded earlier in the process from our project, but of course it’s still sitting in the file system. As long as you stick with Durandal’s defaults this tool will help you creating an optimized main-built.js file. 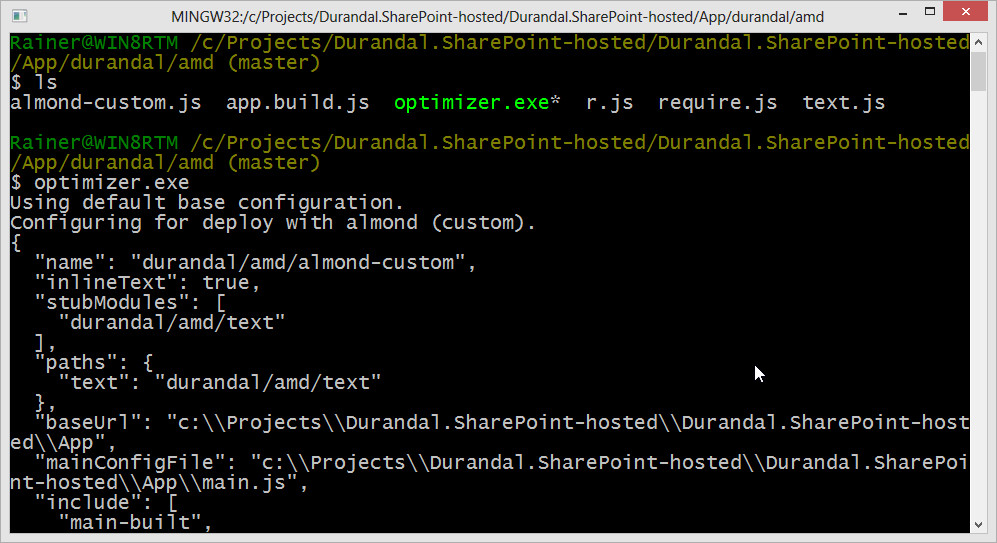 In the last step comment|uncomment the appropriate parts in default.aspx that are responsible for loading main-build.js and you should be good to go. 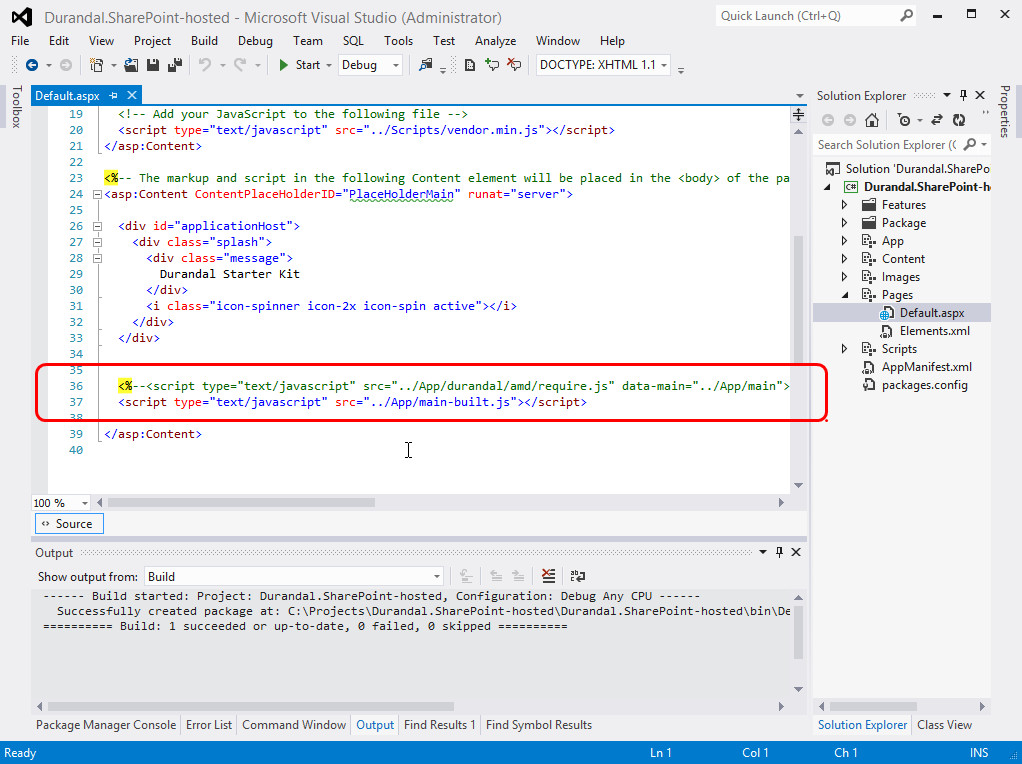 Looks like we accomplished our mission for today and from my first impressions I’d say that Durandal can fulfill the promise of Your search for a SPA framework ends here. In one of the upcoming posts I’ll add my trusted data access tool JayData that allows us to work with native SharePoint list and libraries through OData and see how it fits into the Durandal SPA framework.

Here’s a final word of warning. Before diving deeper into this new and mighty thing called Durandal, remember it’s young. So weigh the risks and don’t miss to dig up the story of Durandal’s eponym. You’ll see that at the end the hero Roland is dead, only the sword survived ;-).